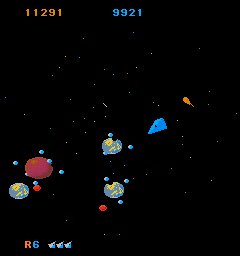 A space shooter with a twist: instead of the usual fare of invading aliens or hostile ships, you face off against actual planets, complete with projectile moons and a chip on their shoulder. As each attack wave begins, the pissed-off celestial bodies zoom in from afar, brandish their orbiting moons, and try to hurl them at your ship. Planets are protected against your shots, until all their moons are destroyed; at this point, they go mad (visible as a bright orange glow) and attempt to ram you to death.

The ship is free to move throughout the screen, using separate controls for movement and rotation. If you wipe out all the planets while they're still growing in size (before they acquire their moons), you're awarded the "perfect round" bonus, which varies from level to level. After every three rounds comes a bonus stage, where your job is to pick up drifting astronauts while avoiding comet collisions.